Originally Published: 06/28/10 on SURFLINE
I was watching your most recent Jaws video clip and have never seen people surfing so fast. How fast is the rider moving in regular beachbreak versus tow surfers at Jaws or Maverick’s?
asked by Marc Moore

The waves at Jaws were moving forward about 20MPH. Add another 20MPH to that the speed traveling down the face of the wave and you’re about 40. So I would estimate between 30-40MPH on the average with the peaks near 50 at times. Kind of like downhill skiing but the slope is always moving and the mountain is trying to fall on you…

The waves at your typical beachbreak move in at about 7-10MPH on the average. On a really fast and steep wave a surfer might get up to 20MPH but usually averages 10-15MPH. So you could say the surfers are going at least three times as fast at JAWS.

Also, as Nick Carroll adds, it’s worth factoring in the speed relative to the water surface. Since water’s being drawn up the wave face, you’re going even quicker than it appears. This definitely counts when it comes to surfboard design — it’s why the little boards work better. (Less friction.) 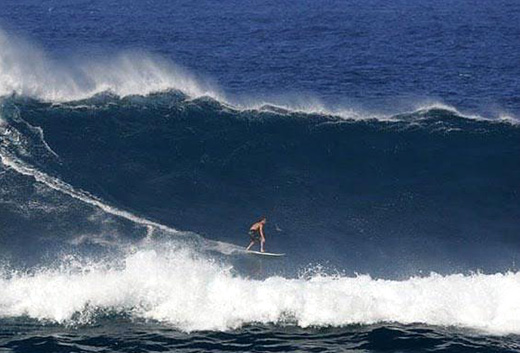