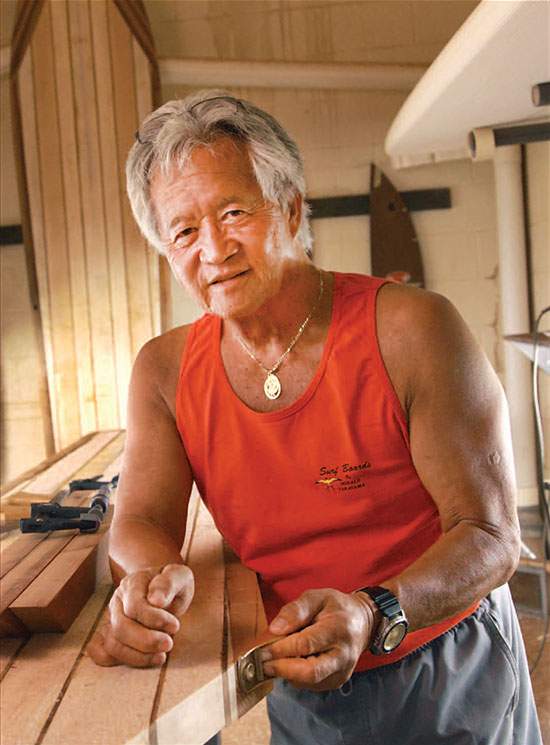 Donald. You wondered about your legacy. It is not made of balsa, redwood, or foam. Hanai-father, your legacy is made up of flesh and bone.

Donald Takayama has been a minstrel of hearts in the world of surfing since the day he emerged from the Ala Wai onto the white sand beaches of Waikiki back when the original Beachboys still dominated the South Shore scene. He has played the tunes of jokester, father, shaper, mentor, and inspiration to five generations of surf evolution and, if his body had given him the chance, he would have continued to play this same song through five generations more.

In Donald, the wicked was always balanced by the angelic; the hard edge was perfectly foiled to a forgiving ellipse; a bad-ass barbecue always tempered with plenty of surfing between drumsticks, sticky- rice, and clam chowder.

Life met its match in “D.T.” These initials were carved into his arm, as if to remind Life that this flesh was his while the blood still pumped through and by that heart that refused to stop and knew no bounds.

He spun his web wide, this song of his, and wove it elegantly into the hearts of those who willingly became captive to it. He was so successful that he found himself forced to work graveyard-like shifts in order to coax perfection from blocks of foam, balsa, and redwood for those of us who were blessed to ride his creations.

Donald’s stories are abundant. They persist. They are a great mythology that line the rock-bed of surfing history: from paipo to fish to SUP. Donald wanted to share as the Duke had shared, with true and gracious Aloha and he did so with a legacy composed, not only of pristine objects, but of hearts who continue to carry his legacy forward.

The song persists, though the voice of the minstrel has gone silent. Each of us who knew this master craftsman, this master of ballad and heart-song, carry a bit of his lasting tune within us. As we move beyond DT’s passing, we will learn to sing the bits he left us – our inheritance – and Donald’s legacy will continue to be a shaping force in the world.

This is his lasting gift: to become an unbreakable force of nature within the hearts he touched, as persistent and powerful as the sea that beckoned him with its siren-song to emerge, fully-formed in his genius, from the depths of Honolulu’s urban labyrinth.

Donald had to go away and it hurts.

But all of us who were lucky enough to enjoy the pleasure of his love and company will always be thankful for his friendship, his surfboards, his hard-won wisdom, and his stories.

Especially his stories. Born on the island of Oahu in 1943, just two years after the attack on Pearl Harbor, when Hawaii was a stillsmoldering Crossroads of the Pacific.

Running fast and loose as a young boy in Honolulu, paddling down the muddy Ala Wai on anything he could find, carried makai on the runoff of Manoa Valley to legendary Waikiki.

Occupying the lower rung on the beach, under the watchful eyes of the original Beachboys: Duke, Steamboat, Rabbit, Blackout, Squirrelly, Tidal Wave.

Learning to pull a drawknife, burying his finished board in the sand so he didn’t have to drag it home.

Living wild on the beach, his hair sunburnt ehu-style, a rapscallion on the make, soaking up the ocean knowledge of the ancients.

A virtuoso on a surfboard, somehow both macho and soft – the ultimate style combo – knees “bullied out,” arms crooked and held aloft, crossstepping for go not show, making long shot runs over the coral to the blasted-out depths of the Ala Moana channel.

Charming the pants off the visiting California surfers and blowing their minds with the quality of his craft.

Flying to the mainland in a propliner when 12 years old, alone and on his own nickel, to shape surfboards for none other than capital D Dale capital V Velzy.

Standing naked on the side of PCH for a few extra seconds while changing into his trunks, eliciting lane swerves and much honking from the shocked squares. A crazy-haired kid with a fourtrack mind: surfing, shaping, hot rods and gals.

Racking up significant placings in the United States Surfing Championships.

Establishing Hawaiian Pro Designs. While very much a business, it also seemed predicated on keeping his surfing friends supplied with top-notch equipment. To this day, significant surfers the world over have DTs in their quiver.

Speaking with twinkle-eyed pride of his daughters.

Always living – with no words needed – a devoted, loving union with his wife Diane.

Traveling the world, welcomed like a touring potentate everywhere he landed, feted by surfing royalty, praised for his foils, his surfing, and his spirit.

An honored and welcome kamaaina whenever he returned to his beloved Waikiki – which was often. Donald was, after all, Hawaiian to the core. That’s where his heart lived.

Swordsmith to the finest longboard surfers in the world, who always seemed to surf to their highest potential on his considered, perfectly detailed boards.

Longtime supporter of North County surfing, tireless barbecue master, generous time giver to the Oceanside Longboard Surfing Club. Any surf event with the presence of DT was bound to be epic.

Stalwart supporter of the Shop Rat ethic, bringing dozens of young wastrels into the trade, giving them identity and pride and a marketable skill. His advocacy for his students was legendary and unconditional.

Broad-minded, nonjudgmental, and utterly without prejudice, Donald had a portfolio of friends from every conceivable walk of life.

So here we stand with a pain in our hearts and tears in our eyes, but more than anything else, the permanent and lifelong smiles from the gift of having known Donald and lived his stories with him. 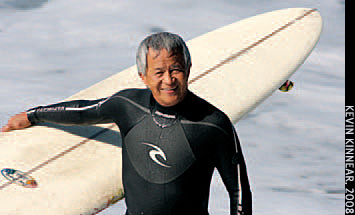