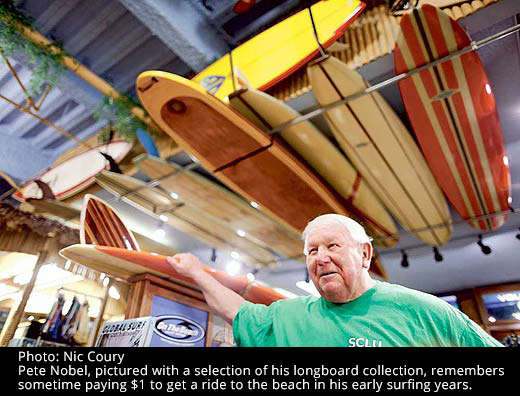 Amid the kaleidoscope of fiberglass surfboards in bright shades of green, orange and white with bold stripes hanging from the ceiling of On The Beach Surf Shop, the long, flat, dark redwood plank looks out of place.
The plank, however, is right at home here, because it’s a longboard with a backstory.

Peter Noble, a former Monterey High School teacher and coach, first learned about the board from former Carmel mayor Ken White, another former MHS teacher-coach, who’d seen it for sale outside of a Carmel home. Noble went to meet the board owner, who was in his mid-80s, and heard the origin story. “The guy was stationed at Pearl Harbor and he and his buddy bought the board for $20 from a local,” Noble recalls. “The board was surfed last on Dec. 6, 1941. They bombed Pearl Harbor the next day.”

The seller, who had seen Noble coach football, said he wanted $100 and a half-dozen of the team sweaters worn by coaches as payment.

The board is one of about 75 on display at On The Beach. That’s about half the total collection Noble has gathered over a few decades. They’re all longboards from the 1920s to the mid-’60s.

Noble, 67, grew up in Hayward and started surfing to be one of the cool kids.

“At 13, I wanted one of those cool shirts the swim team guys had, but I didn’t swim and didn’t surf,” he says. “One guy from the swim team taught me to surf at Cowell’s Beach in Santa Cruz in 1963. I was hooked after the very first time. With all the other shit going on, surfing is cleansing.”

The collection started by chance. “My buddy who owned a surf shop would give me old boards when he got new ones in,” he says. “And I’d go over to my friends’ houses and would get old boards from their moms who didn’t want them around.”

He surfed off and on throughout his college years at CSU Hayward, then went on to become a football coach at various places, including Monterey High, winning several league titles.

As the collection grew, so did Noble’s reputation as a board expert and appraiser. Today the Santa Cruz Surfboard Museum hosts some of his finds. Restaurants also buy his boards for decorations. A number of Noble’s boards appear at Pizza My Heart’s locations in Monterey, Santa Cruz and beyond.

And as his reputation grew, so did the collection: “I had to weed out boards every time I move, but people kept just giving me boards,” Noble says.

A longboard generally goes for $900-$1,200, no matter the condition. “In surfboard collecting, people don’t want them restored,” Noble says. “It’s not like cars – they want boards as-is.”

Stories accompany each discovery. One board was a theater lobby decoration in San Jose to help promote the 1964 film Ride The Wild Surf and has never touched water. Noble met the elderly owner of the board as she was mopping it to keep it shining.

In Spreckels, a man had an extended garage for his 1957 T-Bird car collection and in the course of building the garage, had walled up a vintage Tiki Popout board, a beginner board sold in department stores.

“I had to crawl on my hands and knees through the rafters to look at the board,” Noble says. “It was brand-new and had never been surfed. I made a deal for $60 for having to go get it. The guy bought me a beer, too.”

Noble says his main goal with collecting is to preserve the history.

“When I started out, I wanted my kids to see the history of surfing,” he says. “It seemed people weren’t paying attention to where these boards came from.” After moving to Monterey in the mid-1980s with his wife, Cathy, the owners of On The Beach approached Noble about exhibiting his collection at their original Carmel shop. When Owner Kelly Sorensen opened his larger Lighthouse Avenue location, now going on 30 years, it meant more display room.

“It adds a lot of character and history to the store,” Sorensen says. “We have a ton of guys who come in and haven’t surfed in a long time, but they become nostalgic for their childhood seeing the boards.”

Robert August, who starred in Endless Summer, mentioned on a visit how he shaped one of the boards on the ceiling.

“He definitely has got some gems in here,” Sorensen says. “We’re a great storage unit for Pete Noble.”.

A selection of the Surfboard Museum is viewable at On the Beach Surf Shop, 693 Lighthouse Ave., Monterey. 10am-6pm Sun-Thurs, 10am-7pm Fri-Sat. 646-9283, onthebeachsurfshop.com/surfboard-museum