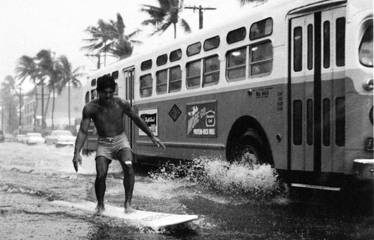 Teenage Bobby Ah Choy rides the wake created by a bus after a tsunami caused flooding on Kalakaua Avenue, then a two-way street.

Bobby Ah Choy, a Waikiki beachboy for 50 years, died of cancer Monday at the age of 66. Although Bobby was suffering, he was determined to captain and steer his outrigger canoe carrying Don Ho's relatives out to the spreading of Don's ashes off Waikiki on May 5. He steered his canoe from Kuhio Beach down to the shore fronting the Royal Hawaiian, but that's as far as he could go. He collapsed. He was diagnosed with cancer last October and given a little more than a month to live.

Bobby and former beachboy Don Stroud, who later became a Hollywood actor, grew up on the beach and were close friends since their early teens. Don and other longtime beach boys paddled Bobby's canoe out, with Pat Camvel as captain and steersman, to the spreading of Ho's ashes.

Bobby was a great waterman and a colorful beach character. Don has loads of stories about him. Here are a few:

Bobby, Don and Mudd Werner were on Kalakaua Avenue in front of the Surfrider Hotel after a tsunami hit in 1957. Despite flooding, buses were running on Kalakaua. When Bobby saw the buses were leaving a wake, he ran and got a surfboard and surfed the buses' wake. 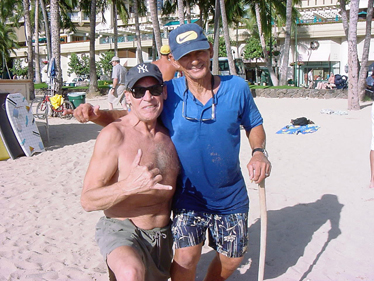 Bobby would take any kind of ocean wager. In the late '50s, beachboy Mike Meyers bet Bobby $10 that he could not surf on a door. Bobby took the bet, went home and took his family's front door off the doorway and returned. He paddled out to Canoes surfing spot on the door and caught a wave all the way to the beach, Don said. Bobby's dad gave him hell for taking the door down and using it to surf.

Then there was the $50 surfboard paddle-race bet -- big money in those days -- between Don and Bobby. The course was from Kuhio Beach around the Diamond Head buoy and back. Don was an outstanding paddler on a board and was using his regular 9-foot-6-inch balsa board. Just before the race, George Downing brought Tommy Zahn's 12-foot racing hollow balsa wood board for Bobby to use. Don raised his eyebrows but raced anyway. He was first around the buoy with Bobby on his heels. Approaching Publics, outside the wall, Don was in front. There is a shallow reef that runs all the way in from Publics to Kuhio Beach. Bobby got off his board, got on the reef, and with the board under his arm, ran about 100 yards over the coral reef to win the race. Nobody set up any rules. Bobby had tough feet.

"Bobby Ah Choy has always been my hero," said Karen Schmidt, his girlfriend and caregiver until the end. She met him in 1986. "The first time I saw him, I was in the water swimming and looked up to see Bobby standing on a surfboard, holding a camera, with a paddle under his arm. As I got to know him, he taught me everything about life on the beach, surfing and the outrigger canoe. He taught me how to paddle and helped me get my Second Captain's license and Surf Instructor's license, which was at that time almost impossible being a wahine. 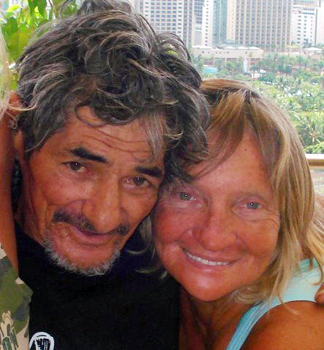 "Every morning, he would clean and rake the beach. He loved the beach all his life and shared his love and aloha with all. He would go to any length to help other people. If someone needed money, he would give. If a family needed to take out the ashes of a loved one, he would do it, never asking for money."

When Bobby became ill, Karen drove him to the beach every morning and watched over him. The beach guys would drop by and take photos with him, not knowing when he would be leaving them. He was a true waterman, in the old tradition. The water was his comfort zone, the only place he felt at home, and there he will finally rest. A beachboy funeral is planned June 7. His ashes will be taken out from the Waikiki Beach area fronting Duke Kahanamoku's statue. Talk-story time starts at 8 a.m., and Bobby's ashes will be taken out at 10 a.m.

"His life was devoted to the beachboy tradition, and he tried to hold on to that legacy till the end," Karen said. "He was my hero, my best friend and my brother. He was my love. There will never be another Captain Bob, and I will miss him."