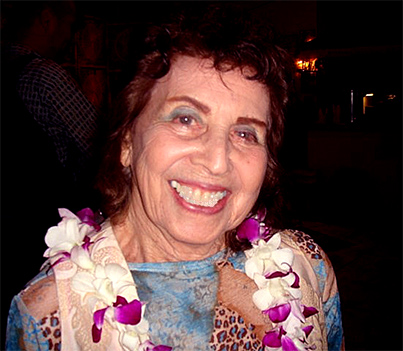 Jackie Ward, living in Hawaii since 1966, is recognized as a cultural icon and patron of the arts. Her accomplishments reflect a life of giving to our community.

She worked for Parks and Recreation in the 60’s and 70’s and produced huge cultural festivals like the Great Hawaiian Jubilees and Renaissance Fairs in Kapiolani Park as well as other parks and venues around the island for many years.

She also started the summer shows at the Honolulu Zoo. She founded the Hawaii Chamber Orchestra Society and went on producing countless chamber concerts and operettas for decades. In addition she also produced over many years a large jazz festival named the Great Hawaiian Jazz Blowout.

In 1974 she founded and incorporated Hawaii Public Radio, becoming the first chairwoman of the new board of directors she assembled and then hired the first staff to run the radio station which today comprises two stations covering the entire state.

Jackie also served a few terms on our local Neighborhood Board.

For the past nearly 21 years she has offered her home as a private weekly gathering place called Ward's Rafters, a third floor theater loft. Focusing initially on Sunday afternoon jazz, it was expanded to Friday and Saturday evening offerings as well covering everything from blues to bluegrass to classical to poetry and singer songwriters.

There are many ways that you can show your appreciation and gratitude for a woman who lived a life that most can only dream of. If the measure of a well lived life is how much you loved and were loved in return, then Jackie by all measure truly lived her life well.