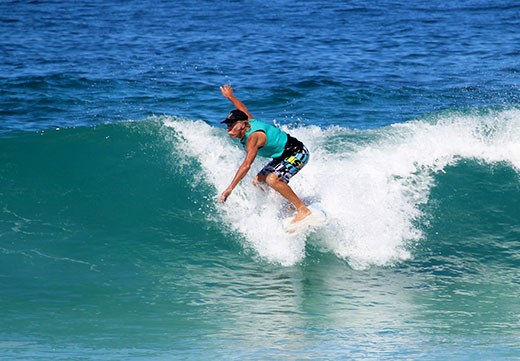 Some people draw inspiration from a Neil Young or Bob Dylan song.  Some people think that a glass of wine and a rare steak inspire them.  Others lie on the roof of a dog house and stare out into space.  My inspiration today comes from Mindy Pennybacker.  She can dive into the ocean, cover herself in surfing memories, and pop up with a new surfing story every Sunday.  Well, I dove into her stories to find my own memories about foam and fiberglass, and here they are.

What is it about human nature that makes us so willing to be donkeys for days, weeks, or a whole lifetime pursuing a particular passion in our lives that we don't want to live without?  My confession is surfing.

I surfed religiously from the age of ten to eleven, perhaps almost every day.  And this was back in the day when a shortboard was eight feet long and weighed twenty-five pounds.  I surfed within a throw from the birthplace of modern surfing.  Waikiki Beach. From Publics to Queens. From Canoes to Pops.  From Kaisers to Ala Moana Bowls. This would have been just following Hawaii Statehood from 1959 to 1961.  I was in fifth and sixth grade at that lower Manoa private school that we couldn't mention back then.

I am not sure whether I was bitten by the Gidget syndrome or whether my  early surfing Gods  like George and Rabbit and the Duke caused the Gidget syndrome.  As a Punahou kid, surfing certainly pervaded the school with icons like Ricky Grigg, Fred Van Dyke, and Peter Cole working at the school.  Classmates Jimmy Blears, Fred Hemmings, and Jeff Hakman were just a normal part of the scene. My personal surf mates  were fellow faculty children, however, most of our ocean friends were also members of the Outrigger Canoe Club right in the center of Waikiki.  We used the club as a home base on the weekends.

I do remember that the first surfboards I had seen were made of balsa wood.  I  remember piling into Mom's 1959 Rambler station wagon every day after school and early mornings on the weekends when we would be delivered to Waikiki and abandoned on the sidewalks of Kalakaua Avenue like four or five more pieces of driftwood.  The worst part of this early addiction was in not realizing the vicious nature of the sun around the equator.  After eight to ten hours with a minimum of food, certainly not enough hydration, and no sunscreen, by Monday morning I would have the world's worst migraine headache.

Combine this with the pecking order that any smallish haole boy might be subjected to in the surfing lineup, I wonder how I lasted those early few years.  I had even pestered my folks for a new surfboard which they reluctantly but finally provided.  I was the proud owner of an eight foot pop-out Velzy shortboard (by the standards of that era). It was absolutely flat, no rocker at all.  The green pigment made grass look like gold.  It was at least twenty-two inches wide and three inches thick.  I could not carry it under my arm.  I could only hoist it onto my head and balance it there down to the water.

The board cost my folks one hundred dollars.  By today's standard after factoring in inflation, it may have been the equivalent of two thousand dollars.  I think this again might prove that I was their favorite child.

We were in the vanguard of those early surfing movie audiences  where the filmmaker brought his film to local venues like Punahou’s Dillingham Hall or Roosevelt’s High School Auditorium and brought  filmed surfing adventures to the slowly burgeoning surfing fanatics.  Whether it were Bud Browne or Bruce Brown, these one man promoters ran the projectors and narrated the films live.  The films were combinations of the latest radical longboard surfing interspersed with the comic episodes of surfers having fun.  And some of our school teachers like Fred Van Dyke, Peter Cole, and Ricky Grigg or school attendees like Paul Strauch and Fred Hemmings surfed across the screens in front of us.

And just as quickly as I had been committed to this all consuming surfing passion, my interests changed.   The sport of surfing was gradually transfiguring itself to much shorter surfboards,  and for the next forty-five years the idea of surfing must have only been a dormant seedpod waiting for the right amount of water, wind, and sunlight to regerminate itself into my life.

Fast forward to the year 2005.  My daughter was attending Chapman University in California but  had a chance meeting with a 6’ 9” University of Hawaii basketball player while home on Christmas vacation.  He wanted to try surfing.  I had surfed.  I also had swum competitively in high school. I played water polo against Keone and Kainoa Downing.   I lifeguarded for ten years for the City & County of Honolulu predominantly at Makapuu Beach on Oahu’s east coast. I even lifeguarded a few weeks with the the famous Buffalo Keaulana at Makaha Beach.   I surely would be able to push a beginning surfer into a few waves.

I bought three surfboards to start the lessons.  A twelve foot Blue Hawaii tandem surfboard.  A ten foot and a nine foot Planet Surf surfboard.  Although he began to learn quickly, he didn’t have the time to spend developing any real talent.  However, he did leave me with a rekindled spirit to get back into the water after thirty years and after leaving board surfing for close to forty-five years.  So for the last ten years I have been out in the waves at least four days a week and many more when the surf is good.

Although you are always looking for that glassy to very light offshore wind day where just you and your buddy are out in consistent four to six foot surf with a long peeling right hand point break, the reality is more like finding windy  two to three foot faces.  Five to ten minute waits  are common between three wave sets.  And usually there are ten surfers sitting in the lineup……. three that are actually surfing, three that are one to three month beginners, and four whom I can’t decide why they are out at all.  They never catch a wave.  They often drift into the impact zone where they may as well be hidden coral heads waiting to interrupt a real surfer’s ride.  And likely, living in Hawaii and surfing mostly in Waikiki,  you will never see six of these tourist surfers ever again. 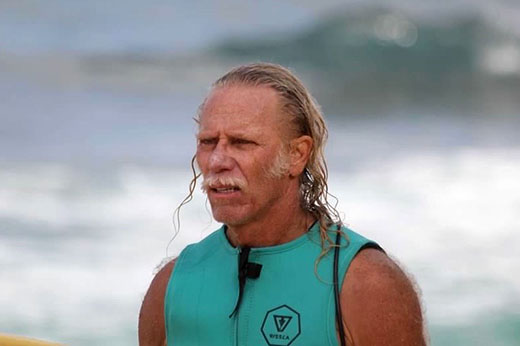 And, yet, those three surfers who actually surf recognize you.  Hell, they have seen you at least once or twice a week for the last seven years.  You have never socialized together outside of the water, but your love for their companionship is unbreakable.  They have sized up your ability.  They know that you know where the peak will line up and that those waves off in the distance that show particular promise have already been seen, and each of you begins to paddle to the optimal area to receive nature’s next blue water gift.  You carve out your own living room piece of realty and pray that you are right.  Wayne always sits deep waiting for those bigger waves that have the longest driving left rides that require a high line half way down the face just to miss those three exposed coral heads waiting to tear off your skegs or worse your head.  I sit on the coral heads figuring that if I start there, I can’t possibly hit them.  Christian on his body board balances mostly between us waiting for Wayne to falter that he may get on before the rest of us chickens down the line.  We make small talk in between sets.  We patrol this part of the break like toothless pitbulls, two of us old guards whose age added together put us a quarter past the century mark.  The youngster presides with the truest of that original Aloha Spirit.  His smile is the richest.  His love for the ocean is the purest.  And like a Hawaiian monk seal, his affinity for the ocean never requires the need for a rash guard or a wet suit.  He loves the waves as much as we do but will easily give up his priority verbally to anyone who would like to take off next.  And you tell him,  “Go, go!”

The sun rises early in the summer and sets late.  Surfers have cut the break into maybe up to six distinct temporal sections.  Dawn Patrol watches the sun rise.  The Breakfast Crew arrives just after they’ve eaten.  By ten almost everyone with fair skin has given way to the midday crowd.   At four o’clock the day workers begin arriving hoping to wash the filth of business and employment into the salt water. And so on.

The reef cuts up the breaks and gives them names every hundred yards.  Old Mans. Nowheres.  Publics. Cunhas. Walls or the Groin. Queens. Canoes.  Pops.  And so on.

Each reef break acts like a western horse corral.  Five to ten would-be stallions jockey and preen.  One can’t stop neighing about nothing.  The one with the agro spirit bucks when cornered.  Two  girls  find themselves sometimes waiting outside the corral until they have paid their dues long past the time their abilities have proven them worthy.  Fourteen surf riding schools  smilingly but jealously guard the inside baby breaks mixing the Aloha Spirit with  reef booties, eleven foot surfboards, and credit card machines.  On a given day Waikiki might easily hold two to three hundred sun burned bodies.

Now if you are lucky enough to have joined any of these fraternities, the waiting begins.  Like sheep, you bob up and down.  Your head constantly triangulates your position while furtively scanning the horizon for those mirage bumps that might foreshadow a special wave.

You ask yourself, “Should I sit at the peak and demand my rightful place to take off or should I sit wide and a little farther out hoping that a monster comes right to me and catches everyone else off guard and too far inside?”  I sometimes mumble my Kevin Costner mantra.  “Wait outside and they will come.”

And, suddenly it is yours.  One, two, maybe three paddles and you are lifted onto that carnival ride you have been waiting for.  You make the drop, bottom turn, pull back up to a high line and teeter your board on the shoulder of the wave as  you move forward for a noseride.  And almost as quickly the shoulder begins to lift before it closes out on the reef.  You quickly backpedal to the tail and choose either to turn straight toward  shore or ….kick the nose up over the back of the wave and save yourself a lot of paddling to return to the lineup.

ANTICIPATION, ADRENALINE, RELEASE from the wave and it is over.  Where I surf, the entire ride lasts maybe ten seconds if I am lucky.  I am out on the ocean about an hour and a half per session.  I try to get ten waves.  I have heard some surfers state that they might sit out at Banzai Pipeline for two hours and only get one wave.  I don’t need a calculator to translate my ten waves into a minute and a half of potential euphoria for the day.  Like I said, most of the time I am just a donkey looking for the carrot on the string.  Occasionally I might get a nibble, sometimes a bite, and sometimes I might snag the whole carrot.  But in the grand scheme of life non surfers must look at us out in the waves and envision a family of crazy ants dancing on the ocean when they might be better served at home doing yard work or better yet, being television couch donkeys.